Kamchatka Gull in Kerry, a potential first for the Western Palearctic

On 6th March 2014, David O'Connor saw and photographed an unusually dark-backed Common Gull at Black Rock, Co, Kerry. The post with photos from this sighting can be seen HERE.

There was much conjecture at the time that it was one of the eastern races of Common Gull, perhaps even a Kamchatka Gull, though it was thought there might be too little detail on the photos - particularly the flight shots - to be certain. 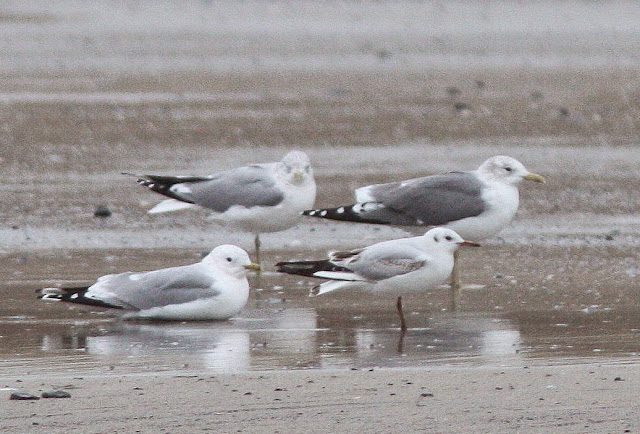 However, a recent paper published in the journal Dutch Birding has refined and defined the identification of this north-west Pacific sub-species of Common Gull, and David submitted the photos to the authors Peter Adriaens and Chris Gibbons for comment. Their replies, shown below, indicate that the Black Rock bird looks likely to be the first record of Kamchatka Gull for Ireland and the Western Palearctic.

Although currently considered to be one of four sub-species of Common Gull, it also seems increasingly likely that Kamchatka Gull will be 'split' in the near future.

Hi. David.
Hi David,
My immediate reaction on opening these images was jesus christ! It is an amazing bird. You are right that the features you would like to see/resolve are not easy to see due to image resolution, but least my first/gut impressions of the standing bird are in line with what Killian [Mullarney] suggests. Ideally you’d like head/neck shawl to be heavier but the jizz is impressive – even in the flight images.  I will have a proper look at the open wing photos as soon as I have a chance to see what I can make out, and get back to you as soon as I can... Wow...

I’m sure Peter will be in touch, and always has very insightful thoughts…

Many thanks for sharing these images

And from Peter Adriaens:

Well what do you know - looks like this is a fully identifiable kamtschatschensis, in Ireland!!

As Chris said, the photos strongly suggest (or even scream) this taxon: it is clearly a bulky Common Gull with rather long forehead, long, strong bill, and strikingly dark upperparts. Head streaking is extensive and the bill pattern (with extensive dusky gonys spot but no dark markings on upper mandible) looks good. It then becomes a matter of finding something in the primary pattern to support and confirm the identification.

Fortunately, in this bird this is possible, despite the quality of the photos being less than ideal.

We can pretty much focus solely on the Old World taxa, since nothing in this bird suggests Short-billed Gull really; size, shape, and patterns of head, bill and primaries are all wrong.

Adult heinei does not normally have this distinct head streaking nor such a strong bill. The bill pattern is still within range of this taxon, but is more typical of kamtschatschensis. A major difference from heinei can be seen on the underwing of this bird: only the outermost primary (p10) has largely black underside, while p9 is extensively grey (the grey tongue clearly covers more than half of the length of the inner web). Adult heinei has a largely black p9, so the impression is that of a more extensive black zone on the underside of the outer hand. On the upperwing, the broad white tongue-tip on p7 is also not typical of heinei.

That leaves canus as the other contender. I believe this taxon can already be excluded on the colour of the upperparts alone. My guess is that this was what attracted your attention to the bird in the first place? The bill does not normally look this strong in canus, but the main difference is again in the primaries: the grey tongue on p9 is also a bit too long for (most) canus, but even more useful is the size of the p9 mirror, which is clearly small. It looks to me like the mirror is confined to the inner web; there is definitely a complete black division between the white mirror of p9 and the one on p10.

Also of interest is that a query of our database reveals that the combination of the p5 pattern (lacking a complete black band) and the small mirror on p9 being limited to the inner web occurred in two adult kamtschatschensis from our sample, but in not a single bird from any of the other taxa.

Despite some minor features being absent which would have made the bird even more typical, such as a pale iris, bright yellow bill, and/or distinct streaking on chin, throat or forehead, I think enough elements are present and visible in the photos to build a strong case for this bird as a Kamchatka Gull - as Killian already suspected...

And remarkable as this is, it seems that possibly this same bird was seen again by Davey Farrar on 4th February 2015, fully eleven months later, in fields not far to the north, around the Cashen Estuary.

Unfortunately, the photos (in this post HERE) are, according to the authors above, just not quite good enough to resolve whether it too was a (or the) Kamchatka Gull, but so convinced was Davey of the importance of the sighting that he spent the whole of the next week scouring the fields in the area in the hope of clinching it with better views and photos.

More on this as we get it, but congratulations to David O'Connor on this jaw-dropping find. It seems Kamchatka Gull is ready to join the celebrity A-listers of ultra rare gulls seen in Ireland recently, a list which includes Slaty-backed, Glaucous-winged and Vega Gull.

There's an interesting blog on a recent occurrence of Kamchatka Gull in Nova Scotia HERE, and a good overview of the Common Gull races HERE.