Royal Tern... a first for Kerry

Davey Farrar experienced a mind-numbing, adrenaline inducing moment when a roosting tern on Beale Strand in north Kerry lifted it's head, revealing a big orange bill. A Royal Tern, and the first record for Kerry! In fact, it is only the second record of a live bird in Ireland. 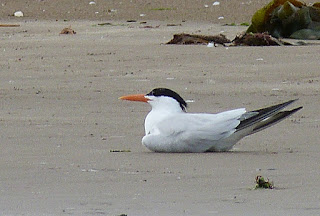 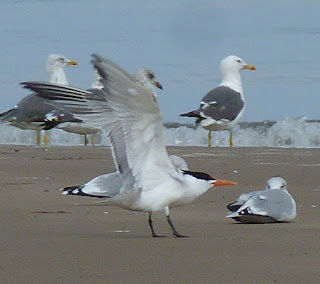 Royal Tern, Beale Strand, 23rd August 2016 (Davey Farrar).
Although adult-like when perched, the open wing shows a dark secondary bar and moulting primaries. Royal Terns take three years to reach maturity, so this would be a second summer, or third calendar year bird, rather than adult.

The first record for Ireland was a tideline corpse found at the North Bull Island, Co. Dublin, on 24th March 1954, while the second was seen for just a couple of hours off Inchdoney, Co. Cork, on 9th June 2009, so the third, at Roonagh Lough, Co. Mayo, six days ago, was a welcome opportunity for twitchers who missed the Cork bird to have another go at this mega-rare tern. Those that travelled to Mayo that evening saw the bird but, while it stayed the night at the Lough, it flew out to sea shortly after dawn, to the despair of a few late-arriving birders. There's a good write-up of the Mayo occurrence on Dermot Breen's blog HERE

The bird found by Davey this morning is the same as the Mayo bird. The distinctive plumage and particularly the damaged right leg are identical, the almost all-dark cap of the Mayo bird now slightly flecked with a little more white as it progresses into winter plumage. 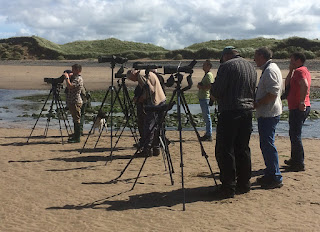 The sighting triggered what amounts to a mass twitch by Kerry standards, and by 6pm about 30 birders had seen it, including a couple of carloads from Dublin and a group of nearly a dozen or so mostly British birders who had been having a slow seawatching day on Loop Head but, on hearing the news, jumped into an assortment of cars and dashed for the Tarbert Ferry. All who travelled so far have seen the bird. 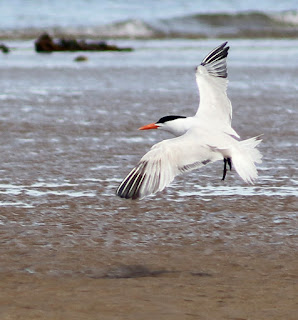 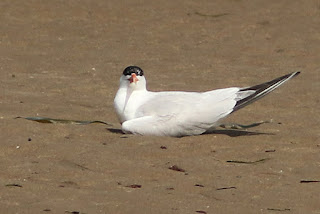 Royal Tern, Beale Strand, 23rd August 2016. A little more white flecking on the left side of the otherwise black crown than when it was seen in Mayo six days previously (M.O'Clery). 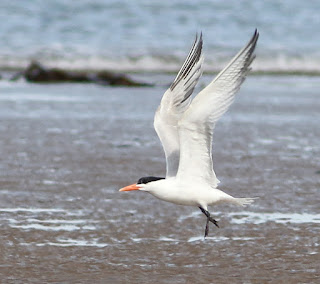 And finally, Davey owns a painting which I did for The Complete Field Guide to Ireland's Birds, which illustrates Gull-billed, Elegant and Caspian Tern, all of which he has seen or found (mostly found) in Co. Kerry. It hangs in pride of place in his hallway, next to his almost equally prized collection of Daniel O'Donnell memorabilia. As of this morning, Royal Tern didn't feature on this painting but this has now been corrected. Davey has thus not only found a first Kerry record, but also trebled the value of his painting with a quick flourish of a biro and a Post-it note. Nice one Davey. 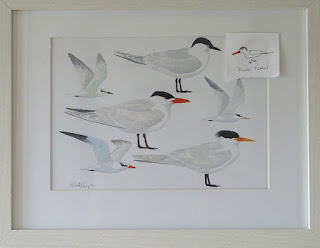