Yesterday evening, an injured Barn Owl was seen entangled in, of all things, a fishing line and lead weight. Though covered in blood, it was able to fly across a field just SW of Ballyseedy Woods near Tralee, and towards the John Mitchell GAA grounds.

If anyone sees or hears  of a report of a Barn Owl in that area please contact 087 9711519 immediately. The only hope for this bird is that it might be captured and disentangled, and rehabilitated if necessary. It would be unlikely to survive otherwise.

We can only assume that the unfortunate owl dived into grass after prey along a river and got snarled on the careless discard.
Posted by Michael O'Clery

Seawatching at Brandon Point was quiet this afternoon, but Gannets diving very close inshore at nearby Brandon Pier provided a distraction. This Bonxie arrived in the small bay, circled high and started drifting south over fields and moorland. I followed it by car, just able to keep track of it, and last saw it about 3km south of Cloghane village, heading strongly high and direct towards the Conor pass. 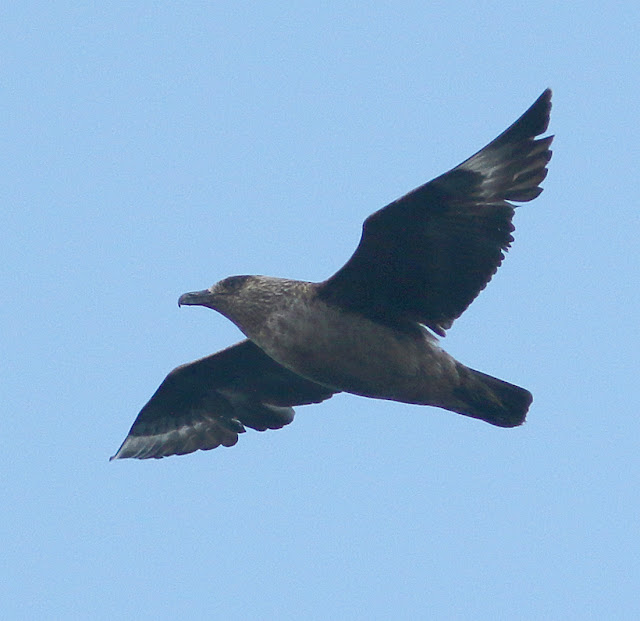 Skuas will only rarely cross over land while on migration in Ireland, and there are only a handful of old records of it happening from, e.g., Killala Bay (see this old Major Ruttledge note from British Birds journal HERE), and a record of 60-70 Long-tailed Skuas migrating along the Shannon River in May 1860.

This is the second time Bonxies have been observing heading inland from Brandon Bay toward the Conor Pass, following a record of five, in September 2004, also during strong westerly winds. 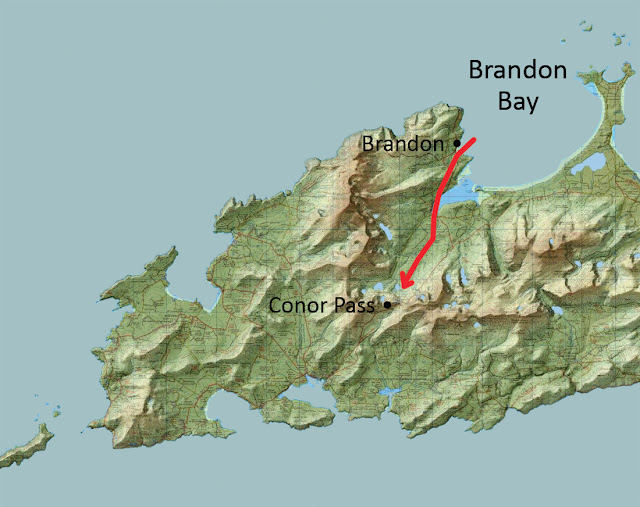 Route of the Bonxie, from Brandon Pier, to Cloghane and to the Conor Pass.

It's possible this is a regular route for a small percentage of Bonxies which find themselves in Brandon Bay. It might prove the easier option to head south over the mountains than to head back into the strong westerly wind along the north side of the peninsula. 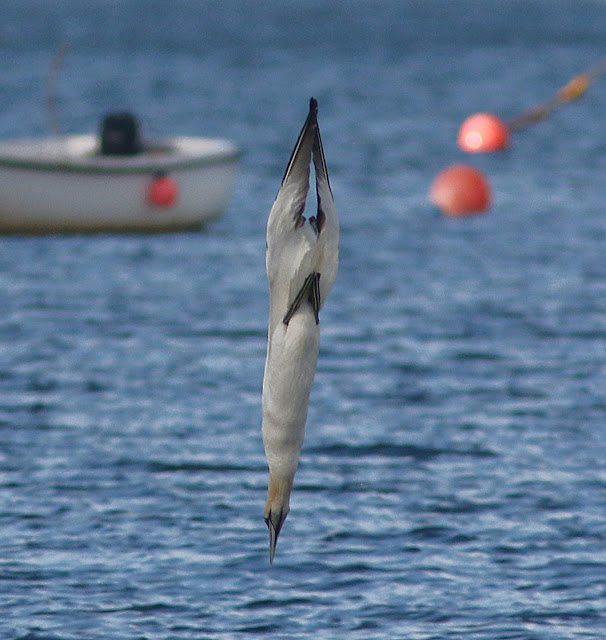 The first Nearctic wader of the autumn. 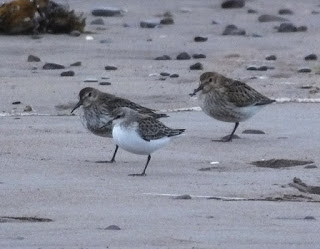 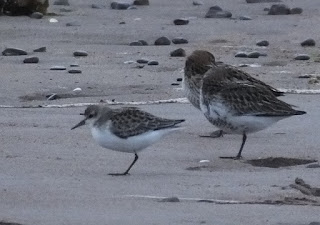 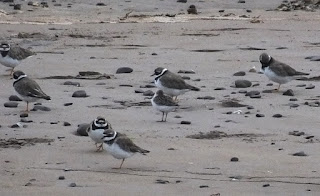 All 4 skuas on Ed's Pelagic

All four species of skua were seen on the annual 'Ed's Pelagic' out of Dingle yesterday, when 12 hardy souls set sail west from Dingle to open ocean, 3-4 kms west of the Blasket Islands. Along with the skuas, several Sooty Shearwaters, lots of Manx Shearwaters, Storm Petrels, Puffins and 4-5 Minke Whales were seen, with Bottle-nose Dolphins, Common Dolphins and Porpoise all making appearances.

Stars of the show were the skuas, with several coming close to the boat and offering fantastic views.

One nearly got away however, when this bird (below) appeared as soon as the 'chum' started going overboard. It was called as an Arctic Skua, but was to prove a valuable lesson in the unexpectedly tricky ID of second year skuas. 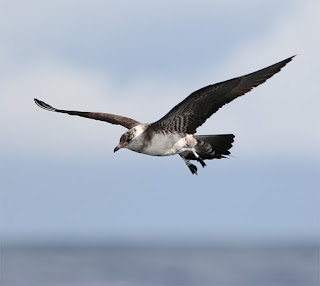 'Arctic Skua', the first skua of the day, which appeared at the chum slick within minutes and stayed around the boat for up to half an hour (M.O'Clery).

With a prominent breast band, apparently dark bill, and the 'classic' two short central tail projections, it certainly gave the appearance of an Arctic Skua. Perhaps because it was our first skua of the day, and also because it was close to the boat, the impression of size was difficult to judge subjectively. And, as other birds started to appear at the chum, the 'Arctic' got pushed aside from centre stage, especially when a beautiful adult Pomarine Skua appeared at point blank range, diving into the slick just off the back of the boat, and a few Bonxies made appearances.

Thank goodness for digital cameras, and no doubt, hundreds of photos of the 'Arctic' were already taken by the range of high-quality cameras and lenses on board, but it was only later, at home, that Eric Dempsey and myself had a chance to go through the photos from the day and realised that this might actually be a Long-tailed Skua. Not a 'forehead-slapping' moment of realisation but rather, ever-growing suspicion with each photo, we were looking at a Long-tailed rather than an Arctic Skua.

Size-wise, we could only be dealing with Arctic or Long-tailed Skua. Checking images against field guides generally showed only adult or first-year birds and scouring for images online threw up all sorts of mis-captioned and/or mis-identified second years. One such skua image was even captioned, 'Glossy Ibis'.

Despite the superficial resemblance to a second summer (i.e., a third calendar-year) Arctic Skua, there were quite a few contradictory ID features. This photo, below, shows how 'dainty' the overall structure of the bird was while on the water, with a shortish bill and slight proportions. 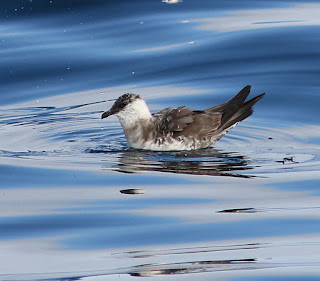 Other features in favour of Long-tailed Skua were:

• There were no warm tones to any of the plumage, especially the remaining immature feathers, whereas Arctic Skua would usually show some warm brown or ginger tones to at least some of the immature plumage features.

• Also, in the photo below, note the contrast between black secondaries and brown greater coverts, a pro-Long-tailed feature.

• And, also in the photo below, only the two outer primary shafts show white, again a pro-Long-tailed feature. 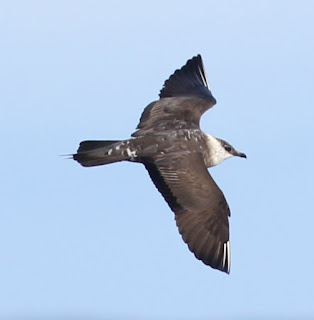 • On the underwing, there was virtually no white primary flash usually associated with immature Arctic Skuas (and most Long-tailed Skuas), as in the photo below.

• The prominent breast band can be shown by darker juvenile Long-tailed Skuas, so is not unique to Arctic and Pomarine Skuas.

• The above features, while not necessarily diagnostic of a Long-tailed, in combination were certainly pointing that direction. The clinchers were the shape of the dark cap, which didn't extend below the line of the gape (Arctic and Pomarine Skuas show a dark wedge of black below this gape line) and the shape and structure of the bill. In Long-tailed, the gonys angle occurs almost half way along the lower profile of the bill, while on Arctic, with a proportionally longer bill, this angle occurs about a third of the way along the underside profile of the bill (thanks to K. Mullarney and A. McGeehan for pointers on these features). 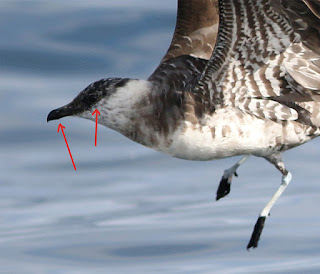 Second summer (third calendar-year) Long-tailed Skua, 4km W of Inishtearaght, 12th August 2015 (M.O'Clery).
Note the gonydeal angle on the underside of the bill, and the black of the 'cap' not extending below the gape line. Interesting also to note the 'dipped in black ink' feet of this bird. Is this pattern distinctive in Long-tailed as opposed to other second year skuas?

So, a second summer (i.e., a third calendar-year) Long-tailed Skua after all. Lots to be learned from this bird. In retrospect of course, we can all say, "Of course it is!", but this was a tricky ID. There were other clues which went missed at the time of the sighting which should have rung alarm bells. The bird fed on the chum slick and showed no aggressive behaviour to other birds, sitting on the water for some time, all behaviours more like Long-tailed rather than the much more aggressive Arctic Skua. Also, although this was the first skua of the day, the small size and proportions should have been evident later, especially once a Pomarine and a Bonxie appeared by the boat, dwarfing the apparent 'Arctic Skua'. 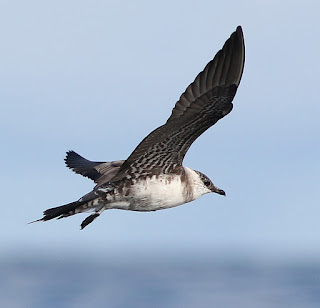 Above all, perhaps the message should be, question everything! Although called as an Arctic Skua, it was photos which proved it to be Long-tailed. Without cameras to hand, it would have slipped under the radar. The clues were there at the time, and of course, we are all now a little wiser. Let's raise a glass to Canon and Nikon... 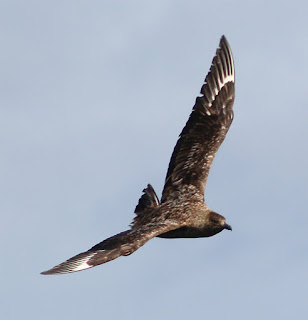 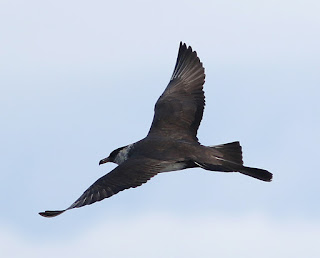 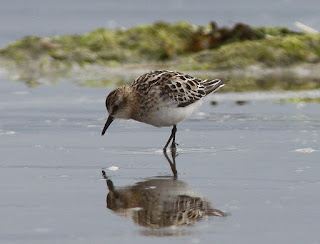