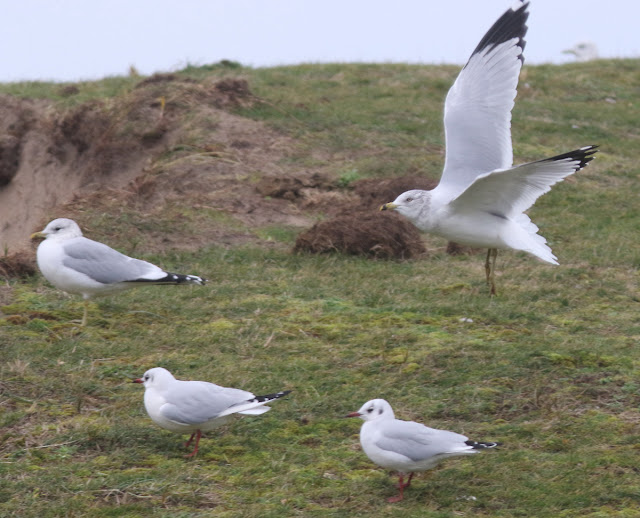 The recent sighting of an Angel at Ross Castle has prompted a trawl through the Kerry Birding Blog archives to highlight some of the identification features of these poorly known supernatural beings.

There have been several recent records of Angels in Kerry, the one below was seen and photographed at Barrow Harbour and is clearly of the 'Mute-Swan-Hybrid' type, with distinctive large white wings sharing all the features of an adult Mute Swan. 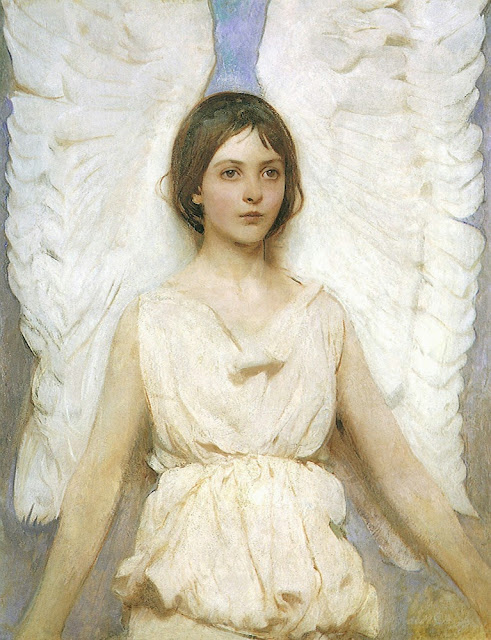 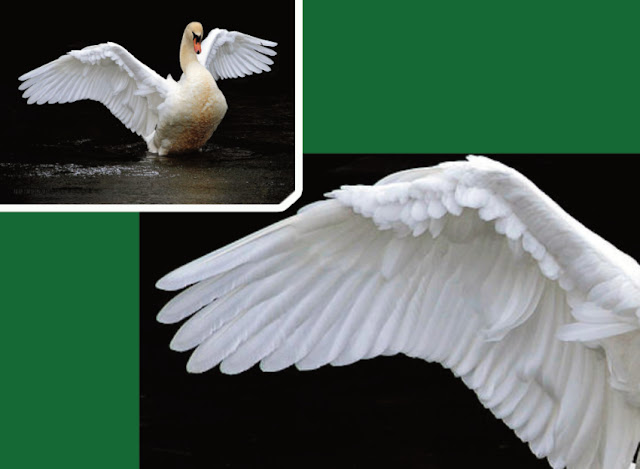 A close-up of the Barrow Harbour individual's open underwing shows the unmistakable similarity to the feather tracts of an adult Mute Swan (D. Healy-Rae).

Of course there are other Angel hybrid types around, some of which have already been recorded in Kerry, and most are identifiable with a reasonable view of the underwing. In the case below the smaller structure of the angel shows that this is actually a 'Cherub' or ''Cheribim'.

The best current text on Angel Identification is a little vague on the finer detail of Cherubs but states: "The two cherubim placed by God at the entrance of paradise (Gen. iii. 24) were angels created on the third day, and therefore they had no definite shape; appearing either as men or women, or as spirits or angelic beings (Genesis Rabbah xxi., end)."

Not a lot to go on there then, in fact more lacking in detail than a Brexit promise, but when the individual below appeared onto Manor West in Tralee last April, right by the new Costa's across from Tesco, based on the underwing detail, it could clearly be seen to be a Cherub-Parrot-Hybrid and indeed, direct comparisons with Scarlet Macaws show several similarities, though many of the colours on the feather tracts have been inverted. Angel-Macaw-Hybrid, possibly with Scarlet Macaw genes, though there are some inconsistencies in feather tract colouration.

The various parrot-angel hybrid combinations, though nowhere common, are quite widespread, and include another seen at a trad session in Dingle in December of this year (below) and, with patience, the underwing was finally seen well and photographed and proved it to be Kerry's first confirmed Angel-Galah-Hybrid type. 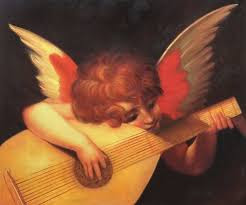 Below, a Galah, an Australian parrot. 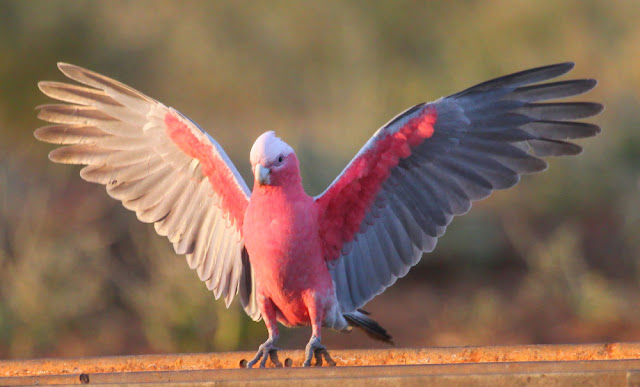 Some angels, such as the Blennerville one from last January, can show considerable moult or wear, and this individual was at the extreme end of the scale in terms of damage to the outer wing - way worse than even the long-staying Gull-billed Tern at the same site some years ago. 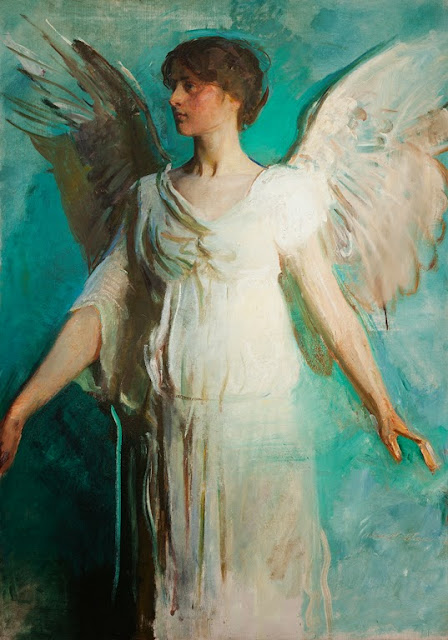 In fact, so severe is the wear on the outer wing that this Angel must surely have been rendered flightless for a time, a possibility backed up by the unconfirmed sighting of this Angel hitch-hiking on the Listowel Road later that day. 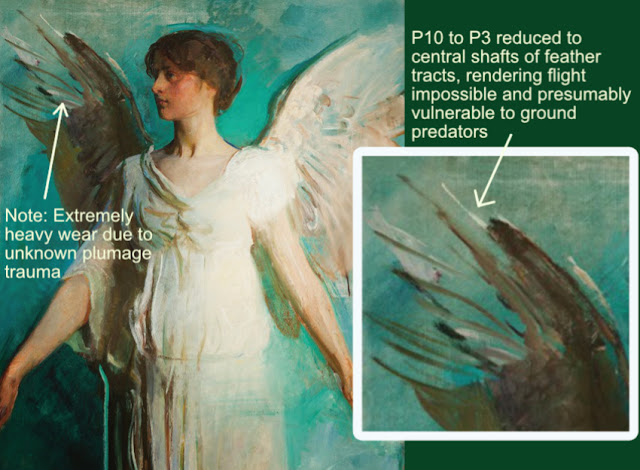 If photographed well, the state of moult on Angels wings can be a useful indicator of the age of the individual. In the case below - an Angel seen near the Abbeydorney Co-op back in August 2015 - there is simultaneous moult on the primaries (both wings showing moulted P6s) and re-growing secondaries (S4). As Angel feathers are replaced sequentially and grow at a known rate, we can safely age this individual at 2,355 years old. 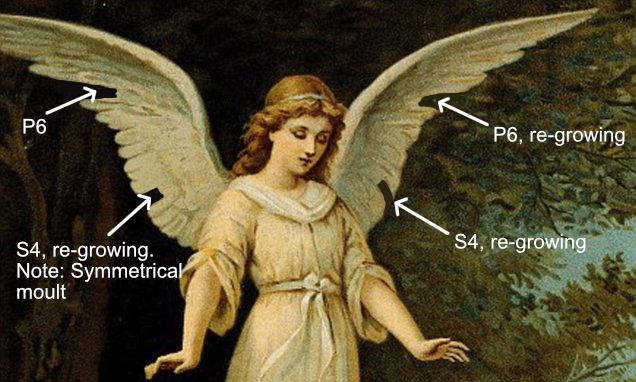 And finally, keep alert for more Angel sightings, especially at this festive time of year.
They probably occur more frequently than the few records indicate and, elusive as they are, some have even been detected on trail cams even though there were no reliable witnesses. 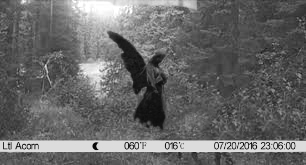 Angel caught on trail cam near its roost site at Scartaglen. 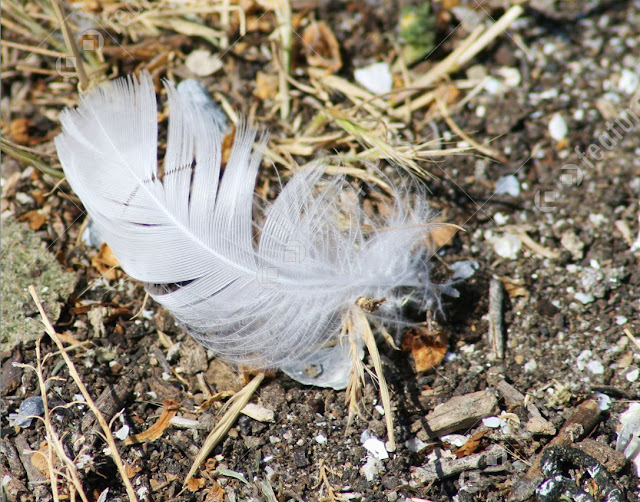 Another useful method to detect their presence in an area is searching for moulted Angel feathers. In the example above, the single white feather at a roost site in a derelict church near Killarney was the only proof of an Angels occurrence. Some might easily have dismissed the feather as belonging to a Barn Owl, or domestic goose or a Mute Swan. Eejits. 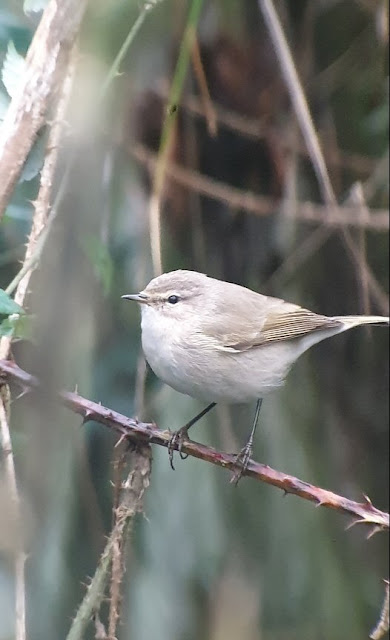 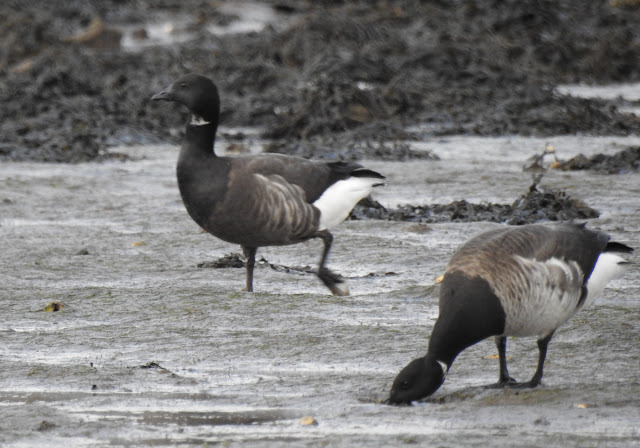 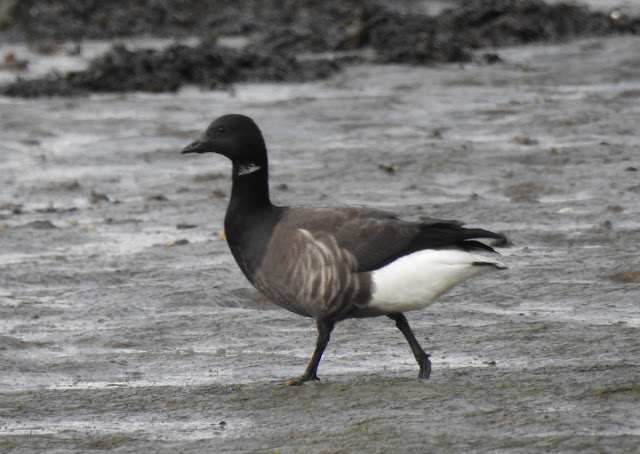 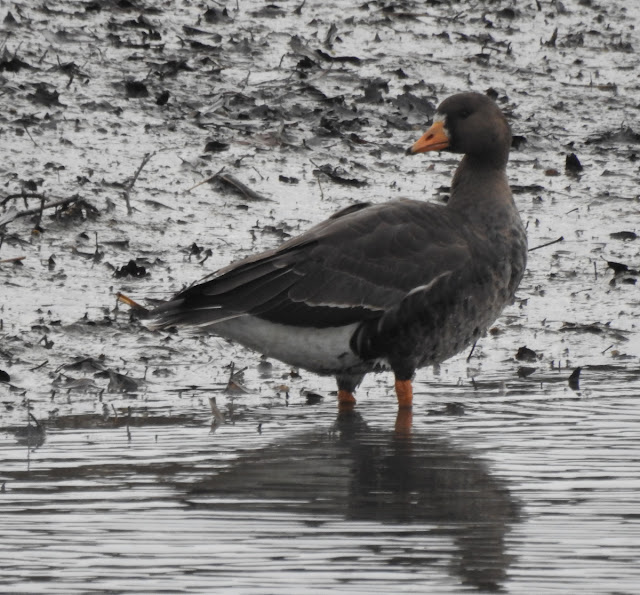 This goose is an odd one, structurally similar to a Greylag, with heavy-set body and short neck, but a few other features such as the black blotching on the underparts and partial white blaze on the forehead show perhaps White-fronted Goose genes in the mix. However the plain mantle feathers lacking prominent pale edging and the dark tip to the bill don't tick the box for any other goose species, at least none that are likely to occur in Kerry in a wild state.

Chances are there is some wildfowl collection owner somewhere who is right now looking around their empty goose pen with a puzzled look, one hand on hip, other hand scratching their head muttering, "Now where the feck did it get to now?". 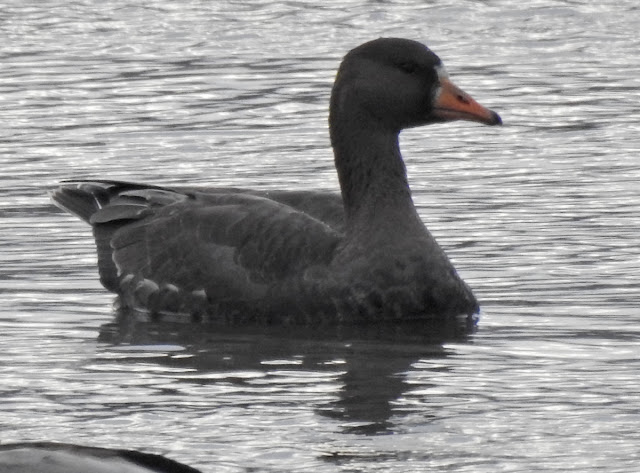 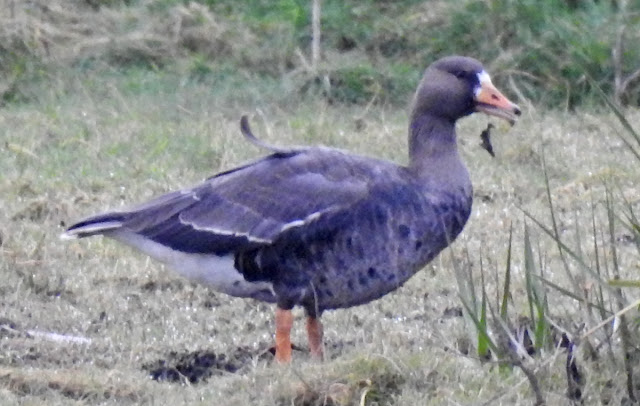 The Black-necked Grebe returned to the waters off Ballinskelligs Pier, seen on Saturday last, and now in its fifth winter at this site. 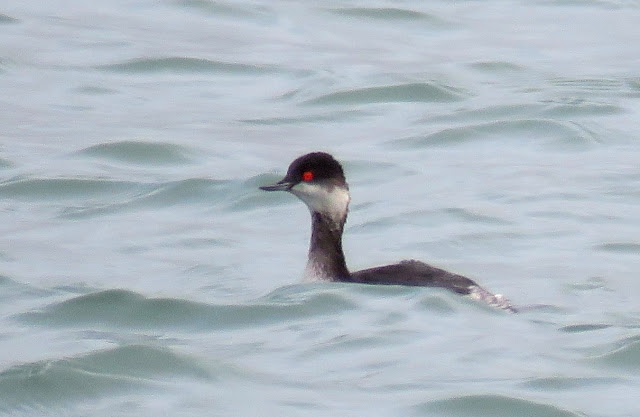 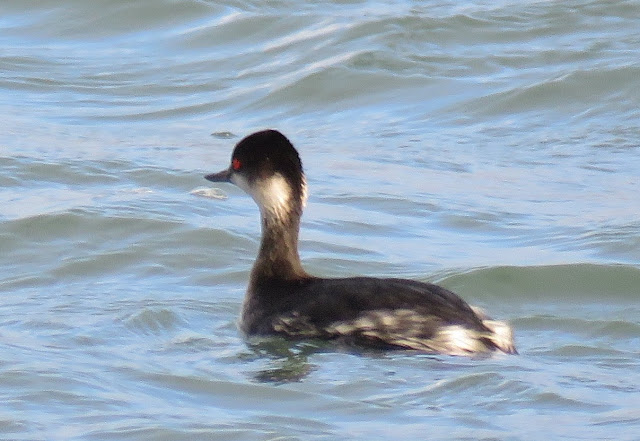 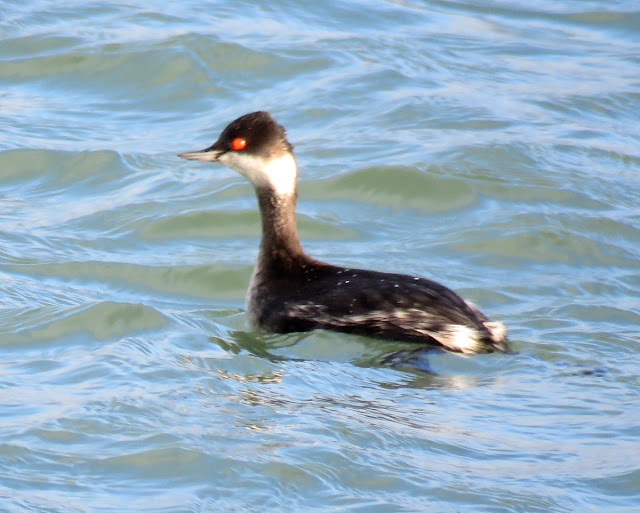