No reason, just a nice photo of a Barn Owl 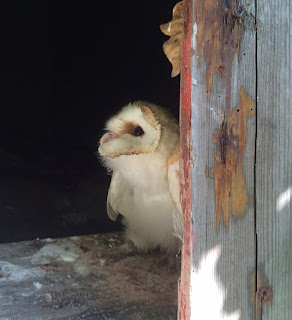 While checking a Barn Owl nest box today, this young bird was present on the windowsill below the box, already able to make short flights.
Posted by Michael O'Clery 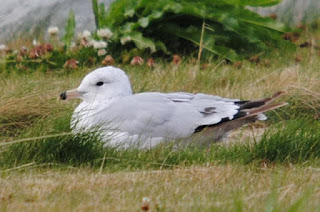 Anyone birding along the coast at this time of year will see plenty of Curlew. Chances are though, they are Scottish- or Scandinavian-born birds, perhaps even Russian, failed breeders, or first summer birds not yet ready to return north to breed. Take a trip inland to find nesting birds in Kerry in early summer and it's a very different story. 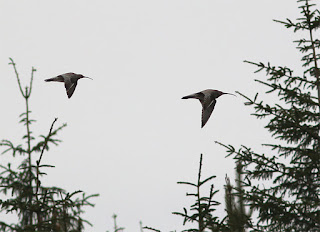 Two Curlews, over potential nesting habitat, Stack's Mountains, May 2015. They presumably failed, as they were not seen again at this site in subsequent visits (M.O'Clery).

There is an ongoing national survey of nesting Curlew in Ireland, organised by BirdWatch Ireland, and, with 2015 fieldwork complete in Kerry, it looks like our worst fears are confirmed.

From just 8-9 potential breeding pairs found during early survey work in May, mainly in the species' stronghold in the Stacks' Mountains, only three were confirmed to have raised young. For a formerly widespread and common breeding species to suffer such a decline is yet another indicator of the decline in our biodiversity. The Curlew looks set to be lost to Kerry as a breeding bird, along with other ground-nesting waders we have already lost, such as Redshank, Dunlin and Lapwing. 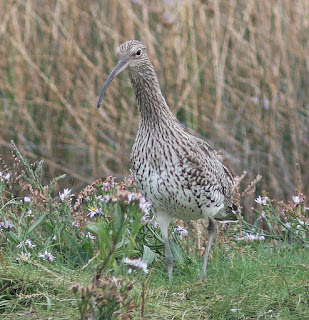 Curlew, on the coast, near Castlegregory (M.O'Clery).

The causes are yet to be fully determined, but observations from the Kerry survey this year show that the successful pairs were on the few remaining large areas of intact, flat, wet bog. That so few suitable nesting areas now remain in Kerry is due to a combination of turf-cutting, forestry and wind farms. These factors combine to dry out bogs, encourage predators of Curlew chicks, such as Hooded Crows and Ravens, and allow more human access and intrusion into previously largely undisturbed areas of bog. Most large bogs in the Stack's are now fragmented and unsuitable for nesting Curlew, hemmed in by vast swathes of coniferous forest and wind farms. Hopefully, with all the survey results analysed, the local factors and the overall national picture will reveal some way that our nesting Curlews can be saved.

For more information, have a look at the BirdWatch Ireland website Curlew Appeal HERE
Posted by Michael O'Clery

There has been a recent series of reports concerning serious attacks by ‘giant seagulls’ in Co. Kerry. One incident, reported in the online version of the Irish Times last week and widely reported in the national media, revealed that a ‘giant seagull’ had attacked a motorbike rider, near Caherciveen, in a ’Stuka-bomber-like attack’. Another claim was that several sheep were attacked and killed by marauding gangs of killer gulls near Anascaul. 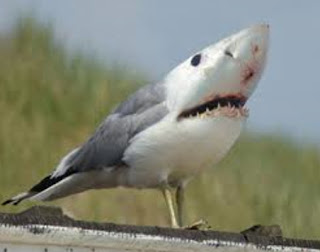 Following the media attention, further details are now emerging of a whole series of other dangerous incidents caused by gulls in Kerry in the past week…

• A Great Black-backed Gull was reported on Wednesday to have ordered a full dinner, two lattes and a pint of Guinness at Sammy’s Cafe at Inch, then left - without paying.

• On Sunday, in Listowel, two Black-headed Gulls were reported to have accosted and threatened an elderly gentleman into revealing his pin number.

• Gardai reported that, at some time on Tuesday evening last, an out-of-control flock of Lesser Black-backed Gulls broke into three holiday homes in Castlegregory, stealing all the canned sardines and hiding the batteries from the TV remote control.

• And, in a more sinister development, a second year Common Gull at Blennerville on Thursday swooped down and stole a mobile phone from the very hand of a pram-pushing mother of three and, not only used up all her credit on a gambling website, but also deleted several really useful apps, before dropping it into the canal.

The Healey-Raes were quick to jump on the bandw… comment, stating, “Particularly in light of the recent referendum, we believe there should be no discrimination in Kerry, so we will be proposing a cull of ALL seagulls, of whatever species, giant or little.”

Not a moment too soon. Be careful people. It’s dangerous out there.
Posted by Michael O'Clery 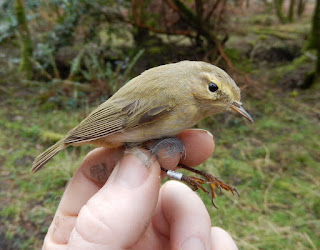 This is the first confirmed abietinus Chiffchaff
for Ireland, recently confirmed by DNA sample and ringed at Ross Castle 23rd January 2015. Not what was expected as we were trying to ring the tritis Chiffchaffs that were at this site over the winter months. In the hand, this bird looked like our nominate collybita Chiffchaff, not the grey and white abietinus birds that we have all been looking for. More to follow, as a paper is in preparation for Irish Birds journal.
Posted by Kerry Birding

On 11th July the first brood of six Barn Owl chicks ever recorded in Ireland was discovered in a nest box near Castlemaine, Co. Kerry. 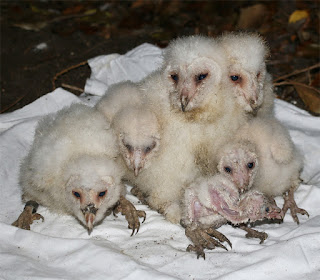 The oldest wild Barn Owl ever recorded in Ireland was discovered yesterday, during ringing at a nest site near Castleisland.

John Lusby, Raptor Officer for BirdWatch Ireland, re-trapped this male Barn Owl and discovered the bird was ringed - by him - as a nestling in July 2007, at a nest just outside Tralee, about 13km away.

At seven years of age, this makes it the longest lived wild Irish Barn Owl yet discovered in Ireland. 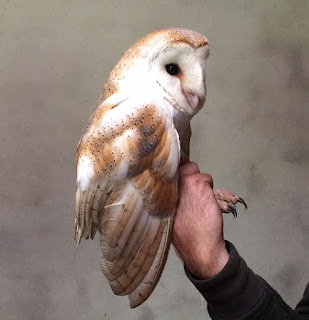 The Red Grouse is a very scarce species in Kerry, with loss of heather moorland habitat to forestry, fires and drainage, compounded by hunting pressure the main causes of a widespread decline. They can however survive for many years in very low densities in areas of suitable habitat. 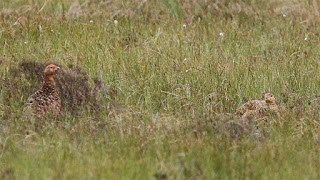 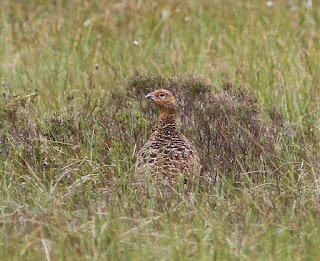 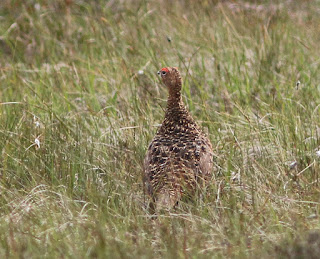 The Irish race of Red Grouse, despite the name, is also found in parts of Western Scotland, and is generally paler and more buff-coloured, which is believed to have evolved to camouflage them better on bogs with a higher component of grasses.

This coloration is readily apparent when you compare the birds above, from the Stack's Mountains today, to the male and female below, photographed in Central Scotland last April. There is a lot of individual variation however, and the Irish Red Grouse gene pool has been somewhat diluted by many introductions of Scottish race birds by gun clubs down through the years. Whether it remains a valid sub-species is open to debate but is a question well worth resolving, as Irish grouse, regardless of race, are in serious decline throughout the country and surely deserving of protection. 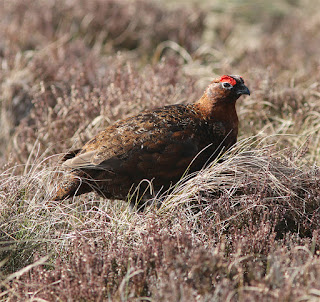 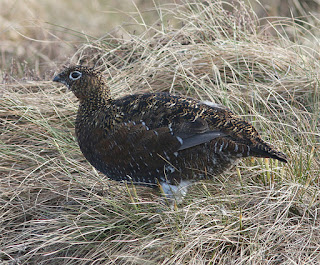